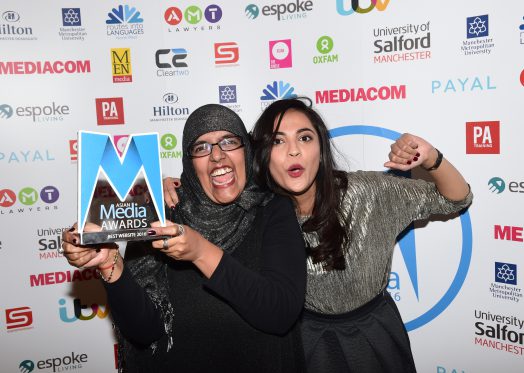 Deeyah Khan's Fuuse production sister-hood magazine which spotlights the voices of women of Muslim heritage took home the award for Best Website at the Asian Media awards in the UK. On hand to accept the prize was the sister-hood managing editor, Afak Afgun who flew in for the event especially from Norway and the deputy editor Mediah Ahmed.

sister-hood spotlights the voices of women of Muslim heritage and disrupts the monopoly on public discourse. From Norway, to Palestine, to Saudi Arabia, UK to Afghanistan and around the world the sister-hood community is growing fast as we stand together in sister-hood and solidarity.

Speaking about the prize on her Facebook page, Deeyah Khan says:

sister-hood matters because women of Muslim heritage are ignored, silenced and marginalized by misogynists, racists, and sidelined in the media. We can - and will - speak for ourselves!

It has been one of the proudest moments of my life to see our amazing team recognised. Not only are the team of Afak Afgun, Mediah Ahmed, Hyshyama Hamin, Joanne Payton and Jett Mall extremely talented and dedicated, but we have attracted over 100 writers and contributors from 30 different countries within just months of launching - a number which will surely grow in future.

I am proud and thankful to have the opportunity to work with such remarkable and inspiring women. Congratulations to everyone who has played a part in sister-hood's success.